Our 5th day of vacation was a little more relaxed. We got up in the morning and Nora had her first pancake meal. She gobbled it up and was covered in syrup by the time she was done. 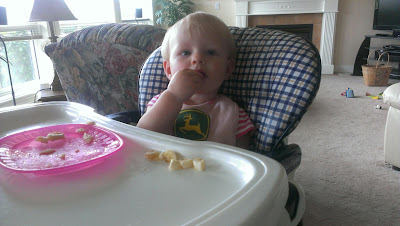 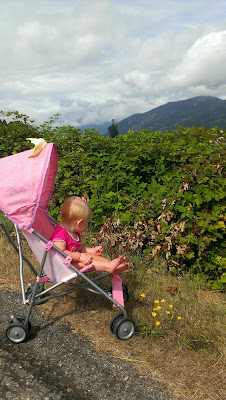 Nora and I went for a stroll through the country and ate our weight in blackberries. I could seriously do that everyday 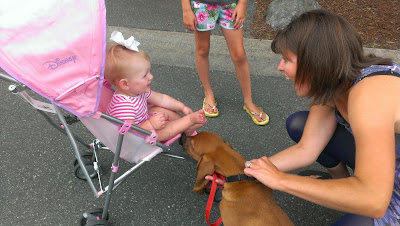 Carissa and Jason drove in from Calgary on Thursday with their boys Dane and Elias. They also brought along their new hound dog, Copper Daisey. Nora was enamored with her 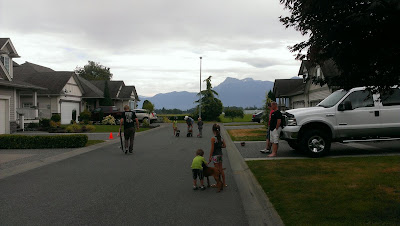 All the kids on their wheels of choice. Wouldn’t you just love to grow up playing outside with those mountains in the background?
Thursday night the “big kid cousins” got a special treat – the Grandparents watched the kiddos and we got to go hit the thriving metropolis of Chilliwack. We went to a local bar and grill called Joe’s and spent the night scarfing down on wings and nachos. But the grand finale of the night was this beautiful plate of food. It’s called poutine and it’s a delicacy in Quebec, but they serve it all over the country. It consists of french fries, cheese curds, BBQ pulled pork and brown gravy – also known as a heart attack waiting to happen. I was pretty reluctant to try it at first, but curiosity got the best of me. I can not even tell you how glad I am that we ordered this. It’s probably something that you can eat only once every 5 years with out feeling guilty. It was so worth every bite. We ended up spending the rest of the night at Boyd and Ade’s watching You-Tube videos and laughing our heads off. We were originally going to go 5 pin bowling, but the prices were ridiculous, and we were all too cheap to cough up the cash haha!﻿