It’s official…Eleanor is an outside child. If we haven’t been outside by 9am every morning, she is moaning and groaning at the front door and practically throwing a tantrum. Not that I mind being outside, but I gotta get my first couple of cups of coffee running through my veins before venturing outdoors. However I would much rather be outside than inside, so out we go, usually by 8:30 for our first walk. And with summer right around the corner, I can already tell that it’s going to be the start of a wonderful summer season!
I very fondly remember summer months as a little kid. They were often spent running through a sprinkler at my Grandparent’s house, rocking out the slip-n-slide in our back yard or spending hours trying to see how fast I could ride my pink and purple bicycle down our cul-de-sac (trying to impress all the other little kids on our street, of course).
Little Lauren in the summer time 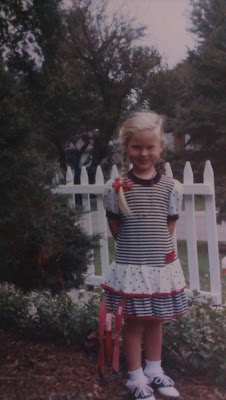 One particular memory I have was one spent at the neighbors house. I was maybe 6 or 7 years old at the time and completely obnoxious (imagine that!). The high school girl who lived next door was named Stephanie and I wanted to be just like her. She would often come over and talk with me about my day, let me pet her dog, Ollie, or just come by to give me a big hug. But one of the GREATEST things ever happened to me one summer afternoon…she asked me to come and “lay out” with her in the back yard. Wow, that was totally a cool older girl thing to do. Luckily my folks said yes, so over I trounced in my pink and black polka dot one piece with ruffles on the bum. I laid my towel out next to hers, she handed me a coke, turned on some music and there we laid. Heck, she even gave me some of her sun tanning lotion – you know, the kind that smells like coconut? I, of course, put entirely too much on, trying to be cool, and smelled like a beach vacation gone wrong. But she just smiled at me and told me how glad she was that I was there. After about 20 minutes, I was hot and sweaty and thinking to myself, “OK, so this is supposed to be a cool thing to do, but I’m SO HOT and SO BORED!” I think she could tell, so she started asking me questions. She asked me if I liked any boys at school, what my favorite color was, if I was going on any fun vacations that summer….such little small talk, but it meant the world to me. I remember walking home later that afternoon feeling so grown up, so important. All because she asked me to come and lay out with her for a couple of hours. Now every time I lay out I think about that day; it was the first day that I ever felt like a “big kid.” Just goes to show you that small gestures really do go a long way.

And now I get to spend hours outside with my own “big girl.” So here’s to some good old fashion picture dumping. I think it’s a pretty good summary of what we have done this past week:
We began to have a significant interest in grass 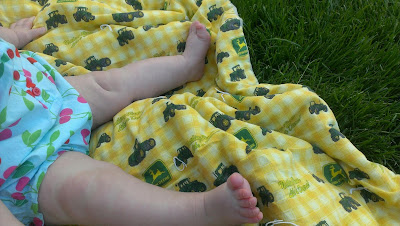 **I would like to pause and take a moment to say how much I love baby toes. That’s all.** 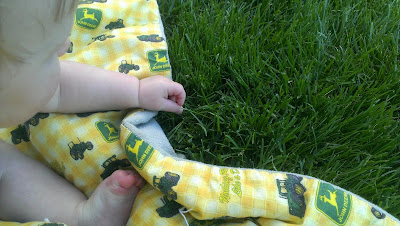 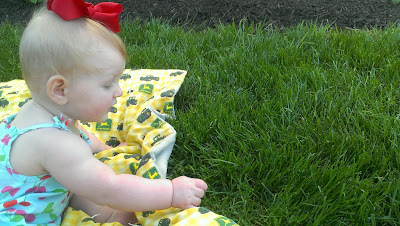 We went for a walk everyday, usually twice! Spoiled child… 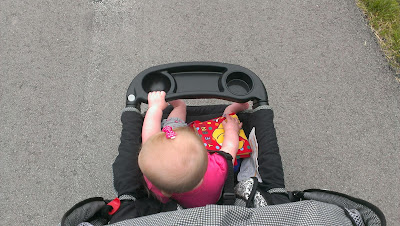 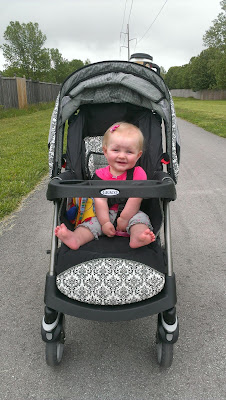 And we then discovered that we get VERY hot and sweaty on those walks and often end up in our diaper by the time we get home. “White trash baby,” anyone? 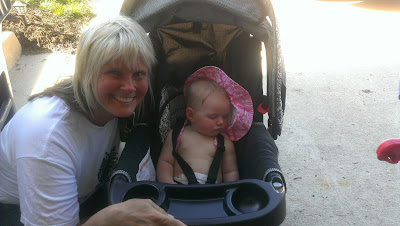 Nora made her first rollie pollie entrance into the world of kiddie pools. She was practically spilling out of her bathing suit….and it was so awesome! 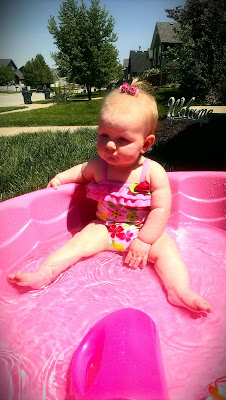 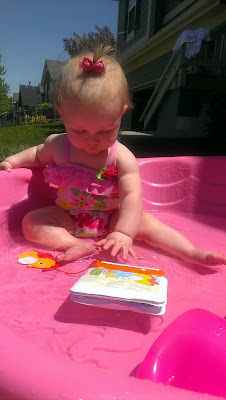 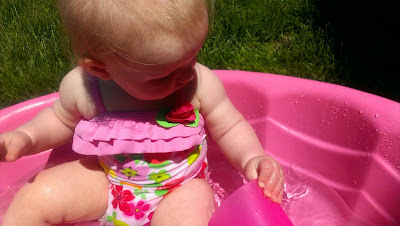 Did I mention we went on walks? This girl was loving every minute! 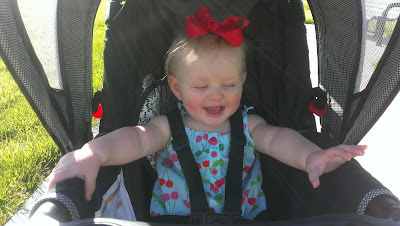 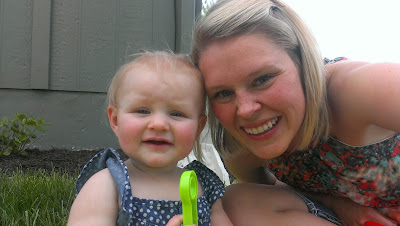 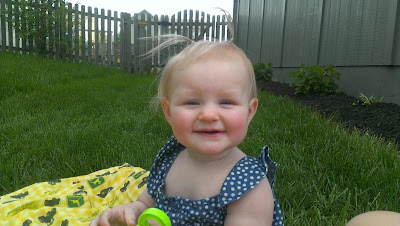 So here’s to the start of warm weather, bathing suits, yummy smelling sun screen and a giggly girl who loves it when the wind blows (que gasping of breath with every gust, here). I can’t wait to see what outdoor adventures lie ahead of us! But good ole’ Gary with 41 Action News says that there could be tornadoes in our forecast later this afternoon…hopefully not like last May when one landed a mile away from our house. Yikes!!! I tend to prefer sunny skies and chirping birds instead!