My sweet little baby girl is 18 months old today. WHERE HAS THE TIME GONE?!? A whole year and a half of fun, spunky, rambunctious life we have had with little Nora in our family. This has been such a FUN month for her. 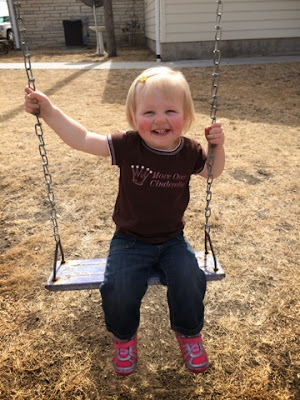 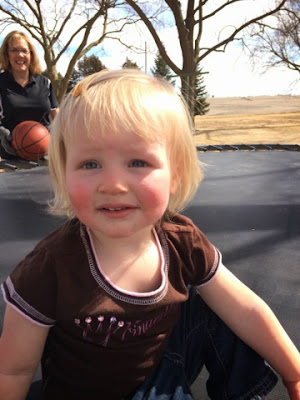 Clothes: Nora is wearing mostly 24 month clothes, although a few of her 18 month ones still fit. We are in the middle of “upgrading” all of her shoes, mostly to a size 6. She seemed to be in size 5 for the longest time!

Eating and Drinking: It’s like pulling teeth to get Nora to drink her milk these days. Honestly, we are lucky to get one big sippy cup down during the day, so I’m hoping it’s a phase she is going through. She loves her daily apple juice and has recently taken a huge liking to cold water, especially while she plays outside. We think that Nora has been going through a growth spurt lately, since she has been eating like a PIG (oink! oink!). She is still sometimes picky about eating meat, but this girl has got some major KC roots in her, as she eats any type of meat with BBQ sauce to dip it in 🙂 She eats just about anything and always enjoys her snacks of goldfish, fruit snacks and green apples. 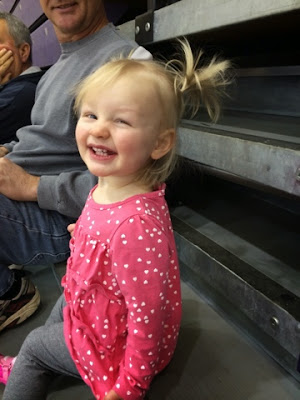 Play and Toys: Now that we have had a few nice days here, we have gotten to experience some new outdoor “toys.” Nora LOVES jumping on the trampoline, swinging in her swing (both toddler and big girl kinds), picking up sticks in the yard and piling them up, and her favorite thing to do….ride in tractors. The lucky girl gets to ride in or sit in one almost everyday and she can’t hardly get enough of them. We have also been doing more crafts together and Nora has been having a lot of fun playing with new “things” from Hobby Lobby and Wal-Mart. I also bought her some plastic Easter eggs and she loves carrying them around. Nora has become a little bit of a hoarder: taking small things and putting them in her pockets, clutching them in her little hands and carrying them all over the place. I always find it amazing where I find things around the house. 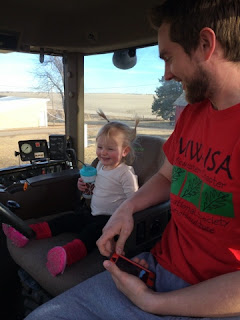 Words: We’ve noticed that since we’ve moved, Nora has significantly regressed in her talking. Not that she was really saying a whole lot, but she was always trying to sound out new words, which was a pretty big step for her. Just this past week she has started trying to say more words again, along with her normal vocabulary. The doctor didn’t seem to worried about it at her appointment today, so I’m trying not to worry, too. Nora’s favorite thing to “say” is still, “Ruff! Ruff!” The child will bark at any dog she hears or sees and loves to “Neigh!” when she sees a horse. I think it’s safe to say that her two favorite animals are dogs and horses 🙂 She loves to have me swaddle her babies and she carries them around, feeding and burping them. I think she will be a great big sister in September!

Sleep: Nora goes down around 9pm, still later than we would like, but the whole time change kind of threw everything off. Because of that, she is also sleeping a little bit later, until 8 or sometimes 9, which in turn throws off when she naps. Whoever invented time change OBVIOUSLY did not have a toddler. Nora naps for about 1-2 hours a day (halleluiah!). It’s been nice to have her nap so well with the morning sickness that I’ve had and she is so much happier when she has a solid nap.

We have really had a wonderful month with our little Nora. She is sneaky, stubborn (lots of tantrums this month!) and fast, although at the same time she is affectionate, loving, playful and timid around strangers. Her personality is such a mix between Eric and I, but she is her own little person at the same time. Nora loves going to our mommy group of Wednesdays and playing with all the other kids, trying to keep up with all of the older ones. She really is the biggest blessing in our lives. I couldn’t have imagined a more fun month! 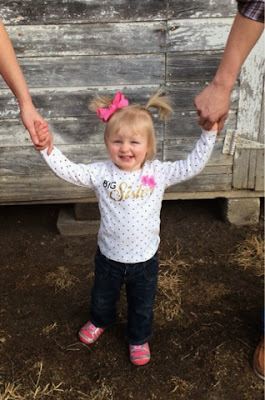 As I was rocking her to sleep tonight, I became so emotional. She was sucking her little fingers, drifting off as I sang “Over the Rainbow” to her, and I started crying. It was like she knew my emotions had changed and she whipped her head up and looked right at me, sucking those chubby fingers, staring me down with those steel blue eyes of hers. It was like she was looking deep into my soul. She wiped the tears from my cheeks with her little hand, and then gave me the ultimate action of love…she picked my nose. I think this describes our relationship perfectly :)﻿