I’m sitting here in the doctor’s office waiting for my MRI, scrolling through the pictures on my phone that I’ve taken over the past month of Nora. Holy buckets…my child is changing so much. Please slow down, time…your going way too fast!! She doesn’t really seem like an infant anymore, but she also isn’t a toddler. Eric and I have decided that she is a “todfant,” so a todfant she will be. 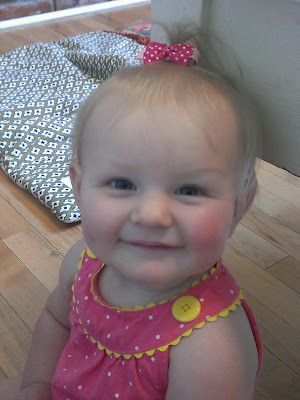 At 9 months, she is weighing in at about 20 pounds, but we will get all her measurements next week at the doctor when she gets her shots. Nora has learned lots of fun new things this month and her personality is blooming to the max! These may not all be milestones per the doctor, but they are milestones in this Mommy’s heart!
1. Crawling – just a few days after she turned 8 months old, she took off after a trail of Cheerios and hasn’t looked back since. She is incredibly fast on all kinds of surfaces and can now go and get things for herself. It’s fun watching her pick out which toys she wants to play with.
2. Clapping – well, it’s only the cutest thing ever. She started out clapping to music, but now she claps to show her approval of something she has done. She is a little prideful of her accomplishments, so she claps a lot 🙂
3. Waving – if you say “hi” or “bye-bye” to her, she’ll give you the sweetest, chubby wave you’ve ever seen (and then clap, because she is proud of herself). Even if she sees someone she is interested in, she will start waving to get their attention.  Lots of waving going on while we truck through the isles of Wal-Mart. I think she is practicing for when she becomes Cinderella at Disney World 🙂

4. Food – we inadvertently started doing baby led eating. She will go no where near pureed baby food anymore – it’s straight for whatever is on our plate. I mean, you should have seen her at Fogo de Chao yesterday. She was an animal. Obviously we have to keep some foods away from her, but most everything we can cut up small and she scarfs it down. Spaghetti is the current favorite right now, along with mandarin oranges. Unfortunately, this has made poopy diapers a little more….um, yucky? Baby poop was NOTHING compared to what we are dealing with now. Ah, the changes of life….
5. Milk – well, my time pumping has almost come to an end. I am now only pumping twice a day for 3 minutes…I’ll be done any day now, and once I’m done pumping, it will be full time formula. Due to the medications I have been on this past month, I’ve had to pump and dump almost everything (which is the WORST. FEELING. EVER.), so sadly my freezer stash of over a month has almost been used up. But lucky for us, we have been giving Nora 2 bottles of formula a day to get her used to it, and she has done AWESOME! I feel very blessed that she has had no problems with it so far and she really seems to like it. I am grateful I have been able to pump for this long and give her solely breast milk for almost 9 months.
6. Steps – Nora took a few steps last night at my parent’s house while she was holding onto furniture. This is a pretty big deal, since she has been pulling up on furniture for a long time and never really had an interest in trying to move. Walking will be here before we know it. Yikes!
7. Naps – or lack there of. We are struggling with getting her to go down. We get 2 naps in a day if we are lucky now, and they aren’t very long. Night time, she goes down almost without a peep and sleeps for 11 hours straight, so I’m not sure why naps are so hard. I stress about this lots, as it can make for some pretty long days. But we will work through it together 🙂

8. Lip smacking – this goes on all the time. And its adorable.

I am really looking forward to this next month. The 4th of July, trips to the pool, a weekend at Grandma and Grandpa’s while Eric and I go out of town, and of course Father’s Day this weekend. Even though this past month has been a little rough between my health and napping changes, there is absolutely nowhere else that I would rather be than at home with my sweet Eleanor Sue. I am so blessed to be her Mama. I can’t wait to see what this next month holds for us, baby girl! 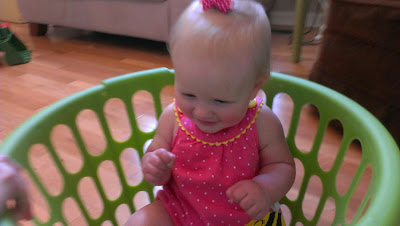 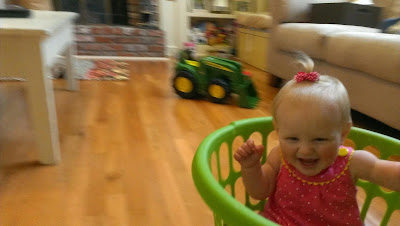