At 36 weeks pregnant, I was very selfishly hoping to spend Labor Day at the hospital in Lincoln. But alas, continued irregular contractions, tons of pressure and bouncing on my birthing ball got me nowhere. This little gal will come when she wants to. She appears to be incredibly stubborn like her Mommy 🙂

This year has been a whole new world for me; lots of unpleasant pregnancy symptoms, adjusting to life on the farm, building our forever home and dealing with anxiety unlike anything I have ever experienced before. Eric’s long hours of 7am-9pm have worn me down way more than I ever thought possible. It’s kind of sad, but I’m already looking forward to harvest being done, and it hasn’t even started yet. But through everything that we have gone through this year, God has gotten us through it all. And getting us through has come in the form of my husband.

Most of you have heard me talk about my husband on this blog, and you know I’m pretty head over heels for him. If you know me in real life, you probably hear me talk about him even more. And if your REALLY lucky, you know my Eric personally. But for those of you who don’t know him, let me share with you a little bit about my bearded farmer and the kind of guy he is and why I want to talk about him today.

While living in Kansas City for 5 years, Eric worked as an arborist for a tree trimming company. His job was very physical, working long hours and in brutal temperatures at times. It definitely wasn’t his dream job, nor what he preferred to be doing. But he did it so that I could work at MY dream job and live around my family instead. He continued to work hard and upwards at his job, making it possible for me to stay home and raise Nora after having her. It was truly a blessing and desire of mine to be at home with her during that time, and his hard work and provision made that possible.

Fast forward to this January when we moved to the farm. Since day 1, Eric has done nothing but tirelessly work to get our new lives established and running. In the beginning of April, he and his dad started building our house, and when planting came at the end of April, he worked sun up to sun down, planting on days when it was dry enough to do so, and working on the house every other chance he got. This was his first time planting and his first time building a house – never once did he complain about the long hours or how hard it was to learn everything at once. Looking back, it truly is astonishing what he did during the months of April and May.

When we had the Mother’s Day tornadoes, we were blessed enough to not have been directly hit at our home. But when there was a need to help others who had been affected, Eric went to help. Putting aside his own deadlines and needs for things to be done, he went to work, a lot of the time for strangers or acquaintances, helping them start to clean up and rebuild their lives. I was so proud to watch him work so hard for others.

As the summer months have come (and almost gone!), Eric and his dad have continued to work long hours out at the house, striving to get as much done before harvest starts here in the next 3-4 weeks with a goal of getting us in the house by December. As my pregnancy has continued, I have grown more uncomfortable (lots of you know what that’s like, and it includes a good dose of grumpiness) and Nora has been exploring more of what it looks like to be very determined, independent and nap-less a couple of days a week. I have had my big ugly cry meltdowns moments of frustration and emotions, wishing that Eric could be home more during this crazy time of life. But Eric, the guy who is actually out there building our home with his own blood, sweat and tears has not complained at all. And every night after working a long day, he comes in with that huge, sweaty smile busting through his sawdust covered beard, soaked with sweat from head to toe and ready to be the best tickle monster and baby doll diaper changer ever. And he always, always gives me a kiss when he walks in the door. It’s the best part of my day.

This past Sunday, we had (another) big storm come through with some pretty impressive winds. This was the same day that Eric and his dad had completely finished our roof, with the exception of the shingles (You have to know, they have been on that darn roof for over 5 weeks-this was a huge deal). My folks were in town this past weekend, so after the storms were done, Eric and I hopped into the truck and drove out to the house to make sure everything was still in tact. When we got there it was quite a sight. Most of the paper covering of the roof that they had just finished laying that afternoon was gone. To be more specific, it was all over our pasture and hundreds (more like thousands) of staples were strewn all over our land. To say it was devastating to Eric would be an understatement. It was the first time I have seen him mad about the house since we started. And it hurt me to watch it. We got out of the truck in the mud and rain and recovered what we could of the roof and loaded it into the back of the truck and drove home. Eric’s steering wheel took quite a beating from him that afternoon.

If it were me, I would have laid in bed the next morning and felt sorry for myself. But not Eric. Eric got up the next morning, Labor Day, took his family fishing to celebrate the holiday and went right back to work on the house, with out one word of complaining. I don’t know if I’ve ever been more proud of him than I was that day.

So this is my small place on the internet to write what is on my heart this week. And as you can see, it clearly is the hard work and attitude of my husband. If he knew I was writing this, he would most likely be utterly embarrassed and ask me to take it down and he would tell me that I’m crazy – that he is just like any other guy. But the truth is that he isn’t like any other guy. He is the most hard working, humble, know-how-to-do-anything-and-if-I-can’t-I’m-going-to-figure-out-how-to, loving man I know. And he is totally my hero. 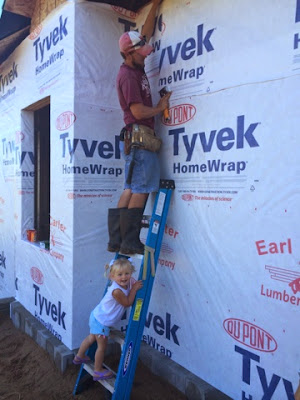 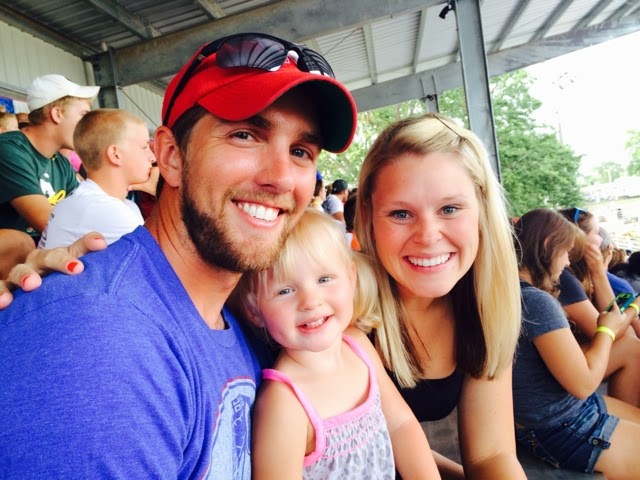