I have been terrified of potty training since before Nora even came into this world. I have heard horror stories, I mean really terrifying, outrageous stories about this big event in every child’s life. I’ve also heard that it is known to be one of the most difficult things that any parent has to do. I would kindly agree…and disagree at the same time. So this is what we have been doing the past few days and this has what has worked for us. 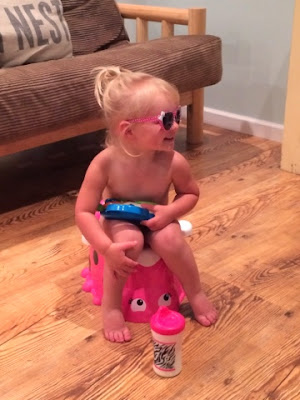 Nora is only 21 months old. Most have said that it is too early to start potty training, but with little Baby Spach #2 coming in September I wanted to at least try. She was showing signs she was ready, so we decided to just go for it. Nora has been obsessed with following us to the potty, flushing for us, has kept her diapers dry for a couple of hours at a time during the day and literally helps us change her diapers for a few months now. Again, even though she showed some of the signs that she was ready I was still skeptical that we would get anywhere fast.

A couple of weeks ago, I took her to Wal-Mart with me to have her pick out some big girl undeeze. I have heard mixed reviews on having them wear undeeze or go bare bottomed while training, but I thought I would just be prepared. She chose Minnie Mouse and Doc McStuffins (duh). We also picked out a portable potty chair (she loves it because it looks like a lady bug) and a big bag of small candy of her choice for when she goes #1 (she chose M&M’s…she is totally my child) and some popsicles for when she goes #2. We decided to start potty training this past week after VBS and our family vacation were done so that we could have a solid 3-7 days to be at home as much as possible. Wednesday night I got out all her new undeeze and potty chair so she could get used to them and try them on, so Thursday was our first day potty training. Big deep breaths…. 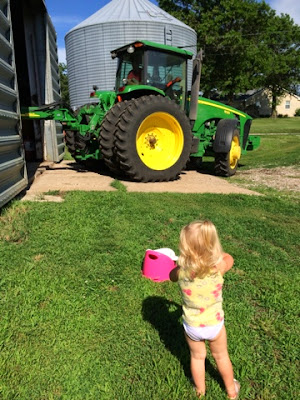 Where Nora goes, the potty chair goes. Even to watch Grandpa put away the planter.

We got up in the morning and I already had her potty out, along with her breakfast and some juice. I sat her down on the potty right away and that was where she ate. I told her to tell me if she had to go potty that she could just go right where she was sitting. Of course, she didn’t go after sitting there for about 10 minutes, but 30 seconds after she got up, she pulled her panties up to go wash her hands after eating, she wet all over the floor and started crying and acting scared. And what happens when your child gets scared? That’s right, they run right into your arms and want to sit on your lap and be held. As you can imagine, I got numerous urine showers compliments of my sweet, terrified daughter Thursday. I kept putting her on the potty every 30 minutes and pushing juice and water through the morning, keeping her bare bottomed so as to not keep soaking all her undeeze. This continued quite a few times that morning and we didn’t have any success actually going in the potty until after lunch. Lots of clean up, lots of crying and trying to figure out what that warm, wet feeling running down her legs was, but she finally got the hang of it.

Later that afternoon, I was thrilled to see that Nora had not only gone 3 times in her potty, but that she had also pooped once in the potty. So after each time going #1, she got a few M&M’s and then after she went #2 she got a Pedialyte popsicle. Every time she went, we did a huge, over exaggerated happy dance and let her dump her potty pan into the toilet, flush and wash her hands. When we played outside, we took her potty chair and continued to put her on every 30 minutes, to which she would just tinkle outside. It was actually pretty cute 🙂 By the end of the third day, Nora was basically completely potty trained at home, wearing her undeeze and telling me when and what she needed to go (pee or poop). We even brought her little potty chair to a BBQ Saturday night and she went three times while we were there. She has been waking up from her naps dry and 3 of the past 4 nights dry as well, so I think that her bladder is starting to get the hang of things. We took her to church Sunday in a diaper, but we didn’t bring her little potty chair along. When we were in Sunday School, she said she needed to go pee, so we ran to the regular bathrooms, where she let out a few drops but then started crying fearfully again. We tried a few more times while we were there, but she ended up just peeing in her diaper. When we got home, she was happy to go in her little chair again. 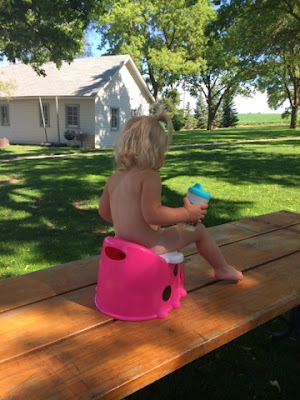 So that’s where we are at…Nora is mostly potty trained at home, but we can’t get her to go while we are out. I’m assuming that it’s just going to take some time to get used to a big potty chair, but I’m secretly hoping it’s not a lot of time. It’s been great only having to use diapers during nap and night time, but has been kind of a pain having to do lots of little loads of wet laundry. So we will continue to hang at home this week and slowly put her on the big potty as we go along. Wish us luck!